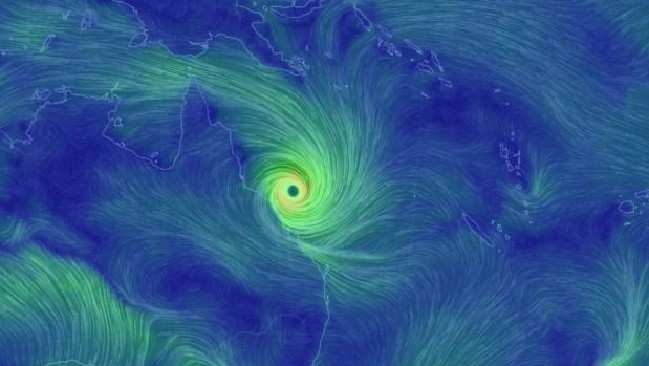 A wind visualisation of Cyclone Debbie. Picture: Bureau of Meteorology

CYCLONE Debbie is doing her worst in North Queensland as the Category 4 system begins to make landfall on the mainland between Airlie Beach and Bowen.

Roofs have been ripped from buildings and flying debris is causing damage as the eye wall of the cyclone, described by Queensland Premier Annastacia Palaszczuk as “equivalent to a one in 100 year event” begins to impact the Whitsunday Islands and coastal towns including Airlie Beach.

The system’s most destructive zone is beginning to make landfall between Airlie Beach and Bowen.

After being lashed by destructive winds and sheeting rain the storm has significantly calmed over Airlie Beach as the eye of the storm reaches the town before the chaos begins again.

A video published by ABC journalist Jonathan Hair from an Airlie Beach apartment shows a fan blowing in the wind that had been ripped from the ceiling and large pieces of debris being dragged by harsh winds across the building’s balcony during the worst of the eye wall’s impact. 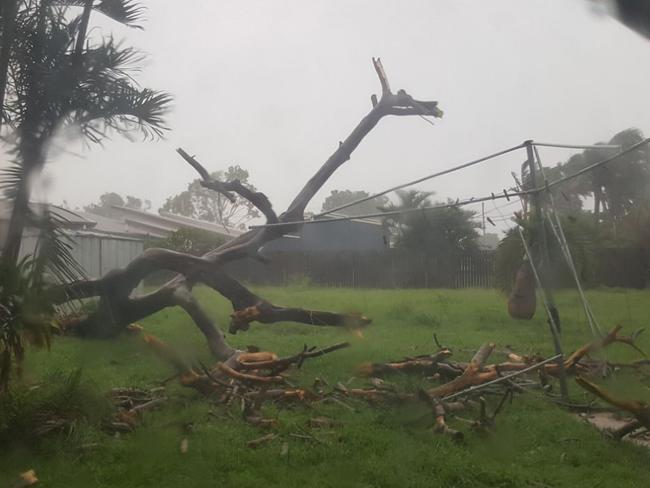 Destruction begins in Bowen which is expected to be among the worst effected areas. Facebook user Tracy Levett posted this image of her backyard in Bowen, Queensland. Picture: Tracy Levett/FacebookSource:Facebook

News.com.au reporter Emma Reynolds was in a hotel about a kilometre away from the beachfront but still in ankle deep in water as the eye wall hit.

“The wind is really ferocious, really intense now,” she said. “It’s roaring like a fighter jet.

“We can’t see the water at all. The sky is completely misted with sheets of rain flying across and branches are being ripped from the trees.

“We’ve heard that the wind is so strong people can barely stand up at the marina.”

BY THE NUMBERS: Cyclone Debbie to bring ‘18 hours of hell’

She said hotel guests, many of them evacuated local families with children, were beginning to panic about the loss of power and communications. There are also questions about how long supplies will last.

“People are starting to get a bit stir crazy... We definitely feel quite isolated.”

“We have a reasonable amount of bottled water and some food but not enough for days and days. We were told to fill up the bathtubs for extra drinking water, but it just keeps draining away.”

The mist at Airlie Beach has cleared enough for people to see the astonishing sight of a boat on the water being thrown about in “huge waves”.

Reynolds said: “I’ve got no idea whether it’s emergency services or who it is but it looks terrifying - anyone on there would be very ill.” 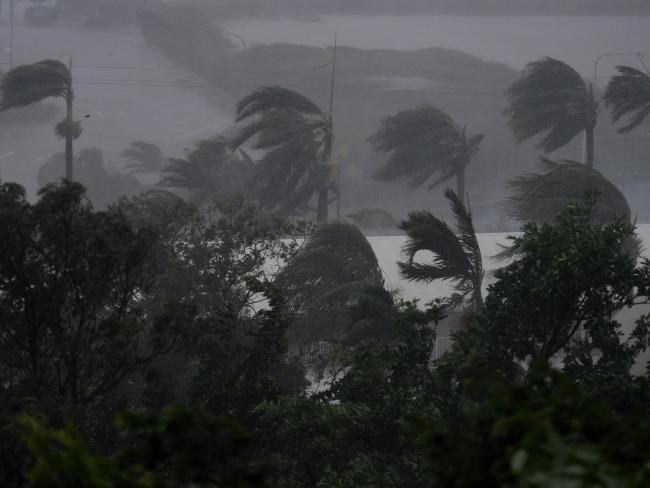 Hotel guests have been told the cyclone’s eye could take up to three hours to pass over them.

“And then it is supposed to get much worse.”

Earlier she reported that the wind was “frighteningly loud”, even at 2am Queensland time.

“We can hear it howling through the trees and frequent banging sounds.”.

“Everyone is trying to get some rest but the noise and worry makes it difficult, as well as the fact we know we may need to move down to our hotel’s underground carpark at some point.

“The power went out just before 10.30pm so we’ve been using torches and trying to conserve mobile phone battery as we don’t know what’s coming next.

Residents on Hamilton Island have reported winds “like freight trains” as the cyclone’s “very destructive core” passes through the popular holiday spot.

At the island’s airport wind gusts up to 263km/h were recorded before dropping to 213km/h.

The Category 4 cyclone is the worst the state has seen in at least six years.

David, a caller to Nine’s Today who is staying on the resort island, said the scenes outside were “like world war three” as he witnessed a tree fall through the roof of a nearby villa.

“I am standing, actually, on the toilet looking out the tiny little window and villa number 42 has copped it, a massive tree has gone through the side of the roof,” he said.

“The winds are insane. I can’t imagine it getting any worse than this. All the trees are destroyed. It looks like world war three to be honest outside.”

Lissa Morris has lived on Hamilton Island for 14 years and has had a house on the island for almost 30. She spoke to news.com.au from her home in the centre of the cyclone’s path.

“It’s massive and so frightening. It’s right on top of us now and it’s stalled with winds in excess of 200km/h,” she said.

“It is so noisy, it’s like half a dozen 747 jets coming through. It’s incredibly loud through the windows. Whether the house will stand a Category 5 which they are predicting, I don’t know.” 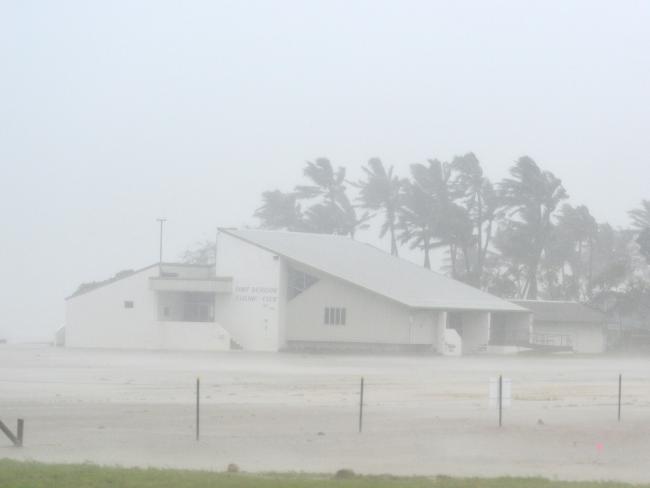 The Bureau of Meteorology’s latest warning, issued at 11am Queensland time (12pm AEDT), warned the eye wall of the cyclone was passing the Whitsunday Islands and the mainland coast. The town of Bowen will face the brunt of the Debbie’s destruction.

The slow-moving cyclone was expected to make landfall on the mainland by 2pm AEST (3pm AEDT), but the BOM has revised that as the cyclone picks up speed - at 9km/h at the time of the latest update.

“While small temporary variations in the track have been observed, as happens with all cyclones, the system is still forecast to move slowly west-southwest and make landfall on the mainland between Bowen and Airlie Beach around midday or early this afternoon,” the alert read.

North Queensland is already in the grip of the Category 4 cyclone’s power as the tropical system threatens to reach Category 5 status bringing with it destructive winds of up to 270km/h.

The slow-moving cyclone is nearing landfall, but threatens to hang around for up to 18 hours before it passes.

The Bureau warned between 150mm to 500mm of rain could fall today and river flooding will likely follow.

Storm surge is expected to lead to waves of up to 8 metres on the Mackay coastline, which is already being lashed as the cyclone nears landfall.

Imminent destruction has transformed the usually buzzing streets and beaches of the state’s tourist hot spots into ghost towns as residents and visitors hole up in their houses seeking safety. 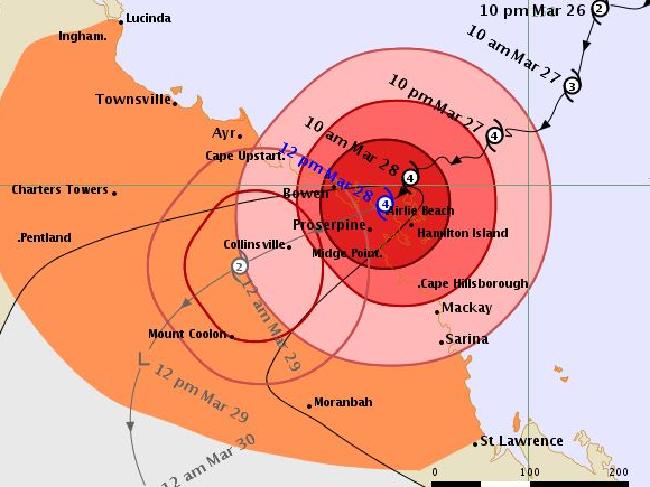 Premier Annastacia Palaszczuk has warned residents and visitors the cyclone will be “absolutely destructive”.

“It’s going to be a really tough time, a really harrowing time for thousands of families in the path of Cyclone Debbie,” she said.

A striking warning from the Queensland Fire and Emergency Services followed.

QFES issued an alert last night to “bunker down”, as teams would have limited capacity to respond until the cyclone passed.

It said people should prepare now by turning off their electricity, gas and water as well as unplugging all appliances.

“Shelter in the strongest room of your house,” and “keep your emergency kit close by”, emergency services warned.