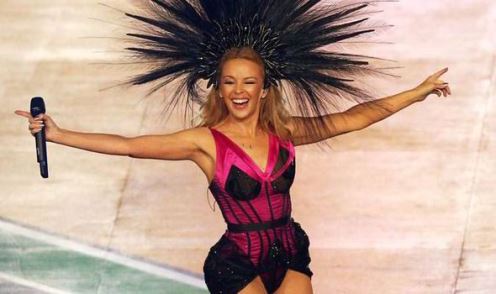 After 11 days of sporting excellence, Glasgow signed off in style with a vibrant Commonwealth Games closing ceremony on Monday. Kylie Minogue was the life and soul of the event.

The sexy singer, who began her performance wearing a sexy corset style dress and changed into a white and gold dress, had to deal with a woman trying to invade the stage and perform with her dancers. But security quickly acted and the unnamed person was swiftly escorted away by officials.

According to AMAZON.com the sales of 46-year-old Kylie's albums have spiked since her dazzling performance to the 40,000 in the crowd In the 24 hours since the show. Her albums The Best of Kylie Minogue, Fever, and Kiss Me Once were the biggest sellers, increasing by 1140%, 800%, and 669% respectively. Other Kylie albums which have seen a huge sales jump on Amazon Music include The Abbey Road Sessions, which saw an uplift of 667%, while Body Language spiked by over 500%.

Kylie kept the crowd entertained with seven tracks, including Love at First Sight, All The Lovers and The Locomotion, before closing her set with a thumping rendition of Can’t Get You Out of My Head.

And with over 1000 per cent increase in her album sales, it seems fans can't get the pint-sized singer's catchy tunes out of their heads. The star charmed crowds, saying: "Do you realize how beautiful you all look and feel right now."