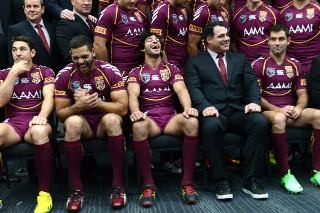 SUNCORP is inviting fans  to celebrate Queensland’s eight-straight series wins at next Wednesday’s third Origin match. The plan with is to honour the remarkable achievements of the Maroons.

The invitation announced that former players who represented Queensland from 2006 to 2013 will be formally acknowledged at half-time. They will then form a guard of honour when the current Maroons enter the field for the second half.

“It’s an important part of our program and culture that we recognise those that have gone before us,” Queensland Maroons coach Mal Meninga said today.

“The players who are not playing in our team at the moment have certainly made fantastic contributions to our success over the last eight years and they need to be acknowledged for that.

“It’s great that the game and the Queensland Rugby League have seen fit to do it in Game 3. I think it adds to the occasion and I know the team will appreciate the players being around.”

As indicated at the Suncorp Stadium website,  after the July 9 match, Queensland will not host an Origin until Game 3 of the 2015 series, meaning this is the last chance for fans to cheer on the Maroons at home for possibly 12 months.

Tickets are still available for Game 3 at Suncorp Stadium through Ticketek http://premier.ticketek.com.au/shows/show.aspx?sh=originpx