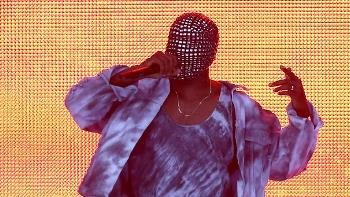 Self-confessed musical “genius” Kanye West was booed by the crowd during his headline set at urban music festival Wireless in London last night.

Having succeeded in alienating an entire crowd on July 4, Kayne West's second headline show at London's Wireless festival once again saw the rapper deliver an impassioned monologue against the paparazzi and media intrusion. Much like the night before, the audience response consisted of a mixture of jeers, cheering and casual indifference.

Appearing on stage in a chain metal mask covering his face, West was heckled by the crowd when he interrupted his 90 minute set to preach about his creative projects and the media’s treatment of him.

"The media paint me as if I'm some sort of villain or like I’ve got a bad bone in my body. I'm really more of a porcupine or a blowfish. And the photos they always take is when that blowfish is blown up or when that porcupine is defending itself from the lies and the control and the manipulation that you deal with if you are an artist. Sometimes my only response is to go 'Aaargh!'" West told the audience during a meandering, impassioned 20-minute monologue that saw him sound off about media intrusion, compare himself to Britney Spears and equated being photographed by the paparazzi to rape.

“They [the media] take the idea of celebrity and make me feel like I’m stupid or something. Yet if you are creative and you want to create more, this is exactly what I’ve been fighting for… F**k whatever anyone thinks. It’s about Kanye’s dreams.

During his five minute speech, the crowd could be heard booing and chanting “off, off, off”, while another audience member shouted: “Shut up Kanye, you’re wasting your set when you could be singing a decent song.”