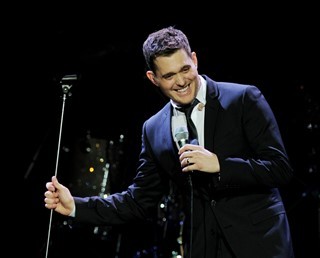 The Vancouver singer with loads of charm has turned his early love of predecessors like Frank Sinatra, instilled in him by his grandfather, into a major career. Hearing the screams that meet Buble as he is dramatically revealed onstage in an impeccably tailored tux, is another reminder of the universal crowd-pleaser that he is. That voice, that velvety-smooth voice, has kept him on a massive seven-leg world tour in support of his eighth studio album To Be Loved. Buble is currently back on home turf playing hockey arenas in Canada. By the time he wraps up his 18 month world tour at the O2 Arena in London this December, he’ll have serenaded fans at nearly 150 shows in 30 countries. So, it’s not an understatement to say that Buble has polished his live show to a sheen. Opening his show at the MTS Centre with a slinky rendition of Fever followed by his 2009 single Haven’t Met You Yet, he set the tone for a night that was all about slick production value and even slicker performances. Nearing the end of his recent Toronto show, Buble joked, “If you’re only as good as your audience, I was frickin’ awesome tonight,” before emotionally taking his final bows.